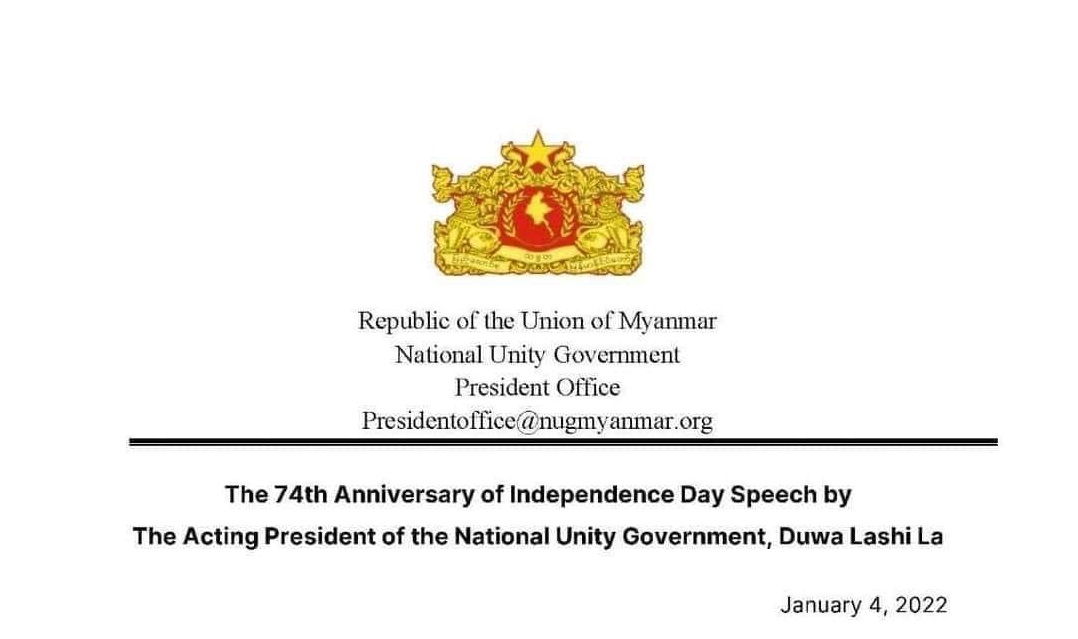 Respected citizens and people of Myanmar,

I am greatly honored to deliver a speech to you all, the citizens, ethnic nationalities, and the people, on this occasion of the 74th anniversary of Independence Day of the Union of Myanmar.

Although it has been 70 years since we were free from colonial rule, it is sad that we are still under the slavery of military dictatorships and harshly suffering their violence and suppression.

Although the state could retain its sovereignty, the freedom of the people, the owner of that sovereignty, has been lost under consecutive coups and we are still struggling for it.

The visions and values of the architects of Independence have truly been reflected in the Independence declaration.

Article 5 of the declaration clearly states, "The New Republic of Burma is also established upon the principle of Burmese unity, not by blood, tribe, or faith, but by a unity that speaks with one voice, representing many."

However, the Myanmar military has outrightly violated the principles and values of the Independence Declaration, and they hold the country as their hostage as if it is their own and are taking advantage of it; thereby, enslaving the country.

As long as the owners of the sovereignty of the country lose their rights, we cannot say the country has achieved its independence.

In the last 60 years, the military has staged a coup four times and has revealed their true colors of fascism. The attempted coup on February 1, 2021, was the ugliest incident in history. All Myanmar people and the international community have seen that the military is using several inhumane ways to repress, torture, kill and commit crimes against the people. This terrorist military no longer deserves to be called the Army as they degraded themselves into the enemy of the people and terrorists.

For now, the people have only one choice. That is to launch a defensive war, a war that all people can take part in different ways, against the military to completely remove the military dictatorship. We can call it a struggle for the second independence.

On last new year's days, I saw a piece of news in which the terrorist military leader said, "This year, we are going start a new step of the peace process and we invite all stakeholders to dialogue for peace."

An attempted coup has trampled hopes of peace. They have destroyed peace and the future of the country. The reason they are releasing such news while they are facing defeats in all areas - in politics, military, and defeats - is no other reason except than to find their political exit, to dither, to deceive the international community, and to confuse the resistance forces. They are also deceiving people by saying that they are going to host an election in 2023. The election held by the military group will not reflect the will of the people, but it also will not be a free and fair election. Trusting this deceitful military will result in dithering the people's revolution processes.

In fact, the war criminals who are stained with the people's blood should not be sent to political dialogues. They should be sent to domestic and international criminal courts. The National Unity Government will always welcome the military personnel who detests the military's atrocities, who believe that their responsibility is to protect the country, not to be involved in politics, even though you may still be under the terrorist leadership at the moment.

In the National Unity Consultative Council, a platform where all the political forces who want genuine federal and democracy gather together, we have confirmed the Federal Democratic Charter that includes a political road map for the future of the Union of Myanmar. The National Unity Government will follow this charter and continually move forward and implement it as in the road map.

The most important thing at the moment is, based on the objectives of ending the military dictatorship and building a federal democratic union, all political forces including the EAOs, should build unity and get involved in people's revolution. The revolution that has sacrificed many lives in the last 11 months will see a new change in 2022 and, have no doubt, we will achieve the people's

As in the Declaration of the Independence which states, "The Burmese people, have here made a solemn declaration of Burmese Independence and of the principles upon which the New Republic of Burma is founded and will be governed", I would like to urge you to let us tenaciously work together until we free ourselves from military slavery and bring back freedom, equality, and justice for the people who are the original owner of the sovereignty.

Our cause shall triumph! 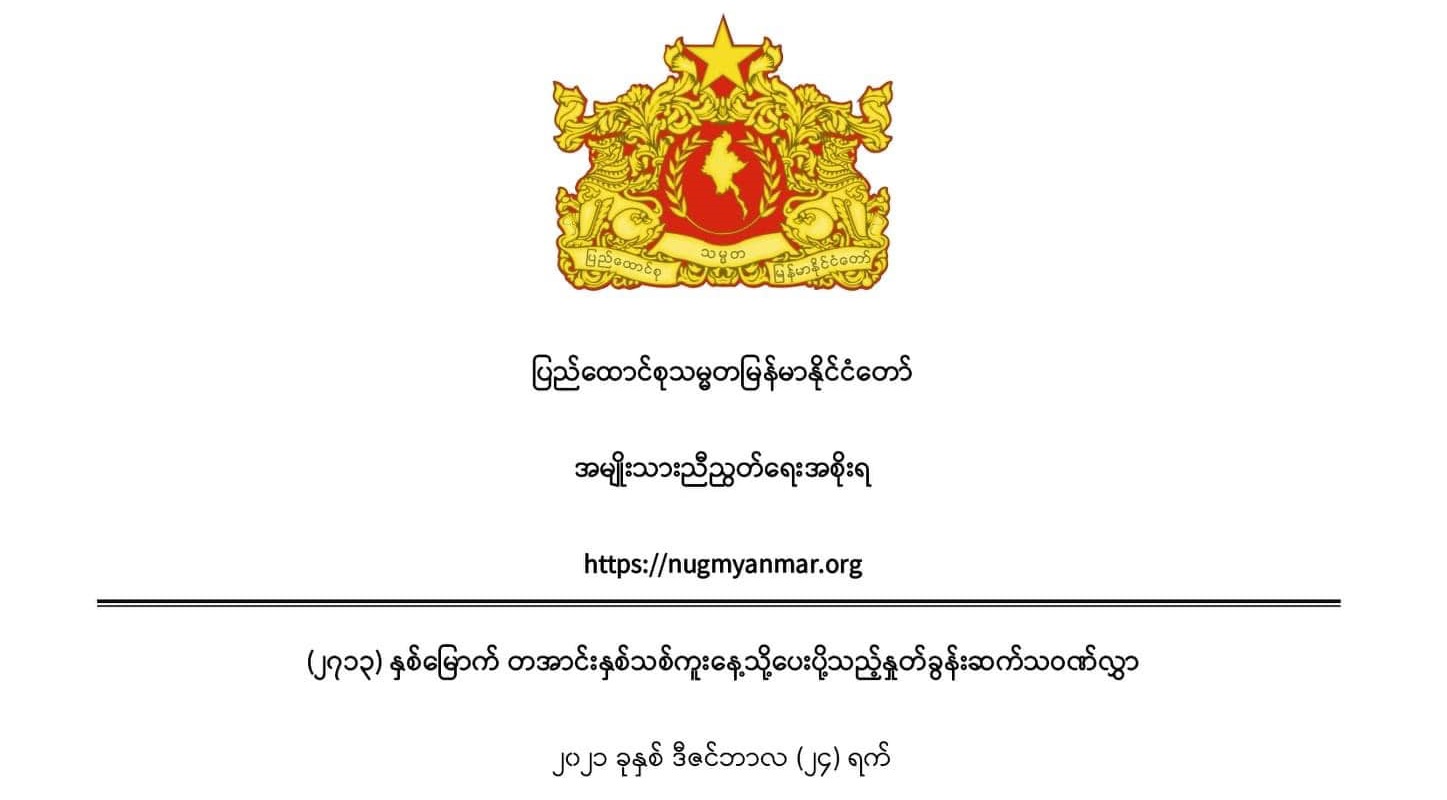 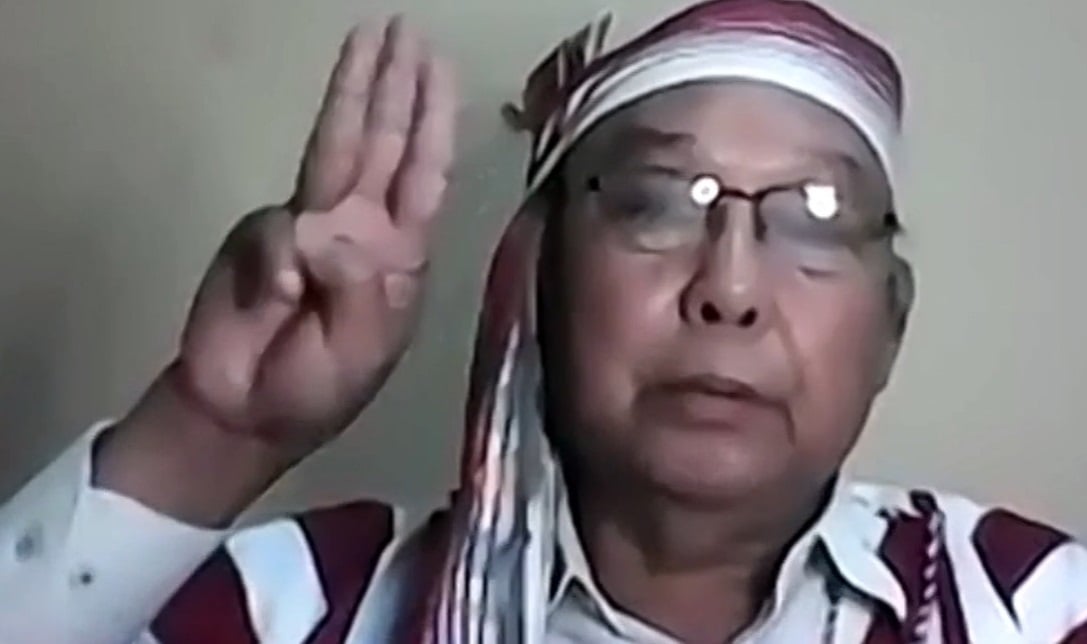