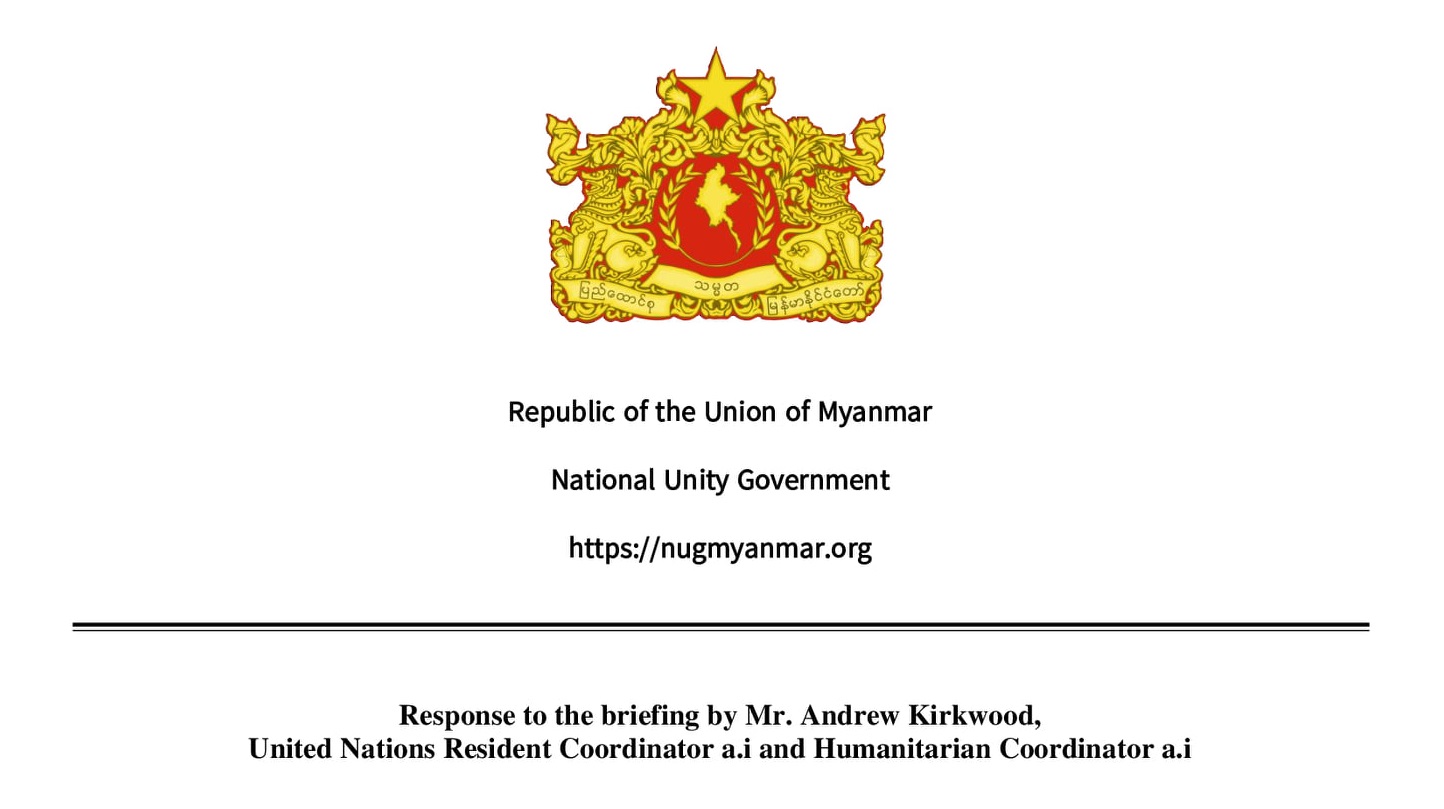 Republic of the Union of Myanmar

Response to the briefing by Mr. Andrew Kirkwood,

The National Unity Government of Myanmar (NUG) recognises the critical roles performed by United Nations (UN) agencies, funds and programmes in Myanmar, and restates its commitment to working in partnership with the UN Country Team (UNCT) and the Resident Coordinator’s Office.

The NUG also notes the 3 October 2021 media briefing by Mr. Andrew Kirkwood, UN Resident Coordinator a.i and Humanitarian Coordinator a.i.  It is however concerned by some inaccurate and misleading representations and significant omissions. They are addressed in this statement.

The Resident Coordinator a.i. referred to a “military takeover” and claimed that the military had “seized control”. This is a dangerous misrepresentation. The NUG, Ethnic Armed Organisations (EAOs), and pro-NUG districts and local communities control significant swathes of territory and are delivering essential services, including healthcare, education and humanitarian assistance. The NUG is constituted of and was established by democratically-elected parliamentarians and enjoys the popular support of the people. Critically, the UN Security Council and the General Assembly  have recognised the continuing authority of President U Win Myint and State Counsellor Daw Aung San Suu Kyi.

The Myanmar military staged an illegal, unsuccessful coup d’état on 1 February 2021 and has since been unable to wrest control of the country’s territory, infrastructure or institutions. It has collapsed service provision. It has acted unlawfully and unconstitutionally. It is opposed by the Myanmar people on a mass, country-wide scale, including by civil servants. On no grounds has the military junta “taken over” or “seized control”.

The Resident Coordinator a.i. rightfully spoke of “a crisis on top of a crisis with yet another crisis on top of that”. What he failed to add during his discussion of the “devastating third wave” of COVID-19 is that these are military-induced crises. The military junta has weaponised COVID-19 through targeted attacks on medical personnel and by withholding access to medical treatment, medicines, oxygen and vaccines. An unknown number of people have died and millions have been plunged into poverty – the same millions that the UNCT is now struggling to reach.

The Resident Coordinator a.i. reported that over 200,000 people have been “newly displaced” since 1 February 2021 “due to the conflict between the Myanmar armed forces, many of the ethnic armed organizations, and these newly formed People’s Defence Forces”. This statement stopped short of linking displacement to the large scale and widespread military operations that have seen civilians executed and tortured, villages raided and torched, and property destroyed and looted. These military actions comprise grave violations of human rights and international humanitarian law, and in some cases crimes against humanity. It is disingenuous and dangerous to generically attribute displacement to “conflict”.

The NUG stands ready to work in partnership with the UNCT and humanitarian agencies to facilitate the delivery of emergency assistance and supplies. The Resident Coordinator a.i. has called on “all parties to use their influence to facilitate… safe and unhindered access”. As the legitimate Government of Myanmar, the NUG will meet this call. However, it is critical that the international community and the UNCT acknowledge that the military junta’s actions are plunging the country into a deeper humanitarian crisis.

The Resident Coordinator a.i. did not make a single reference to human rights or to military atrocities in his statement. Only ten days earlier, the UN High Commissioner for Human Rights briefed the UN Human Rights Council on the military’s crimes, reporting:

serious violations of human rights and international humanitarian law, including violations of the rights to life, liberty, and security of person; the prohibition against torture; fair trial guarantees; freedom of expression, and freedom of peaceful assembly. Several of these violations may amount to crimes against humanity committed as part of a widespread or systematic attack against the civilian population – or, to the extent arising in armed conflict, war crimes.

The High Commissioner added that ‘[t]he human rights violations… being committed by the Tatmadaw today are built upon the impunity with which they perpetrated the shocking campaigns of violence against the Rohingya just four years ago – and also against many other ethnic minorities over decades.’

The Resident Coordinator a.i. must present a more comprehensive picture of the UN’s work in country, including by addressing human rights concerns. The Rosenthal Report on the UN’s involvement in Myanmar found a collective failure on behalf of the UN system to convey ‘more forcefully the United Nations’ principled concerns regarding grave human rights violations.’ These failures must not be repeated.

The Resident Coordinator a.i. has called for a “depoliticised” humanitarian response. The military junta continues to apply its well-worn tactic of holding human lives to ransom. The UNCT must not take the bait by engaging with the junta based on justifications such as “staying and delivering” or “securing a license to operate”. The UNCT must strictly abide by its Engagement Principles, which demand that all programmes accrue benefits directly to the people and in no way grant legitimacy to the military junta. To act otherwise would see the UNCT enable the very “politicisation” that the Resident Coordinator a.i. has warned against. The UNCT is at grave risk of being instrumentalised by the military junta.

The NUG supports the Resident Coordinator a.i. in calling for increased contributions to alleviate the dire suffering in Myanmar. We stand ready to support SERF implementation. All humanitarian and development projects must be implemented through the NUG and its partners, EAOs, INGOs, NGOs, local and civil society organisations, and community-based organisations. Not a single dollar should be directed to the military junta. Calls have been made for the Security Council to list the military junta as a terrorist organisation.  The UNCT and donor agencies should treat it as such.

• Engage directly with the NUG as the legitimate Government of Myanmar. The NUG and its partners control significant territory, deliver essential services, and enjoy the support of the people. The Security Council and the General Assembly continue to recognise the authority of President U Win Myint and State Counsellor Daw Aung San Suu Kyi, and the NUG’s Permanent Representative to the UN continues to represent Myanmar in UN fora.

• Ensure that all humanitarian and development projects are implemented through the NUG and its partners, EAOs, INGOs, NGOs, local and civil society organisations, and community-based organisations. Not a single dollar should be directed to the military junta

• Avoid taking any actions that legitimise the military junta, in line with the UNCT’s Engagement Principles

• More comprehensively present the views of UNCT members, including with regard to the human rights situation in Myanmar and military atrocities

• Update the UNCT’s Human Rights Strategy. New programmes must be informed by human rights due diligence, conflict-sensitivity and risk assessments, and the do no harm principle. The Strategy should also identify the NUG as the primary implementing partner.

Finally, the NUG calls on the UN Secretary-General to formally appoint the new Resident Coordinator as a matter of urgency, in consultation with the NUG.

Intervention by Myanmar at the Interactive Dialogue of the Third Committee on Agenda item 74: Promotion and Protection of Human Rights